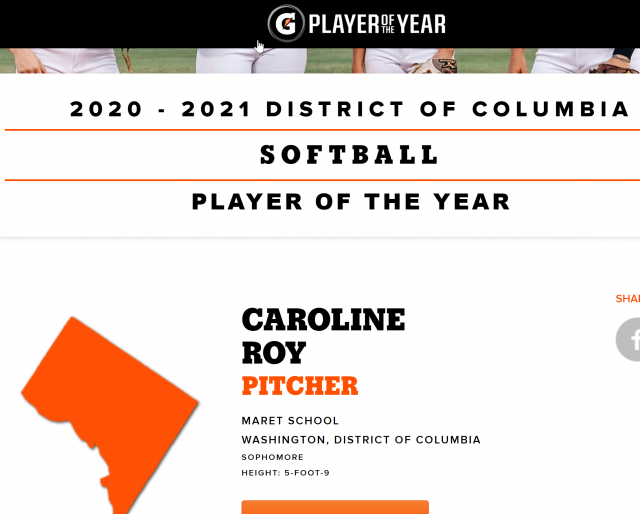 Congratulation to one of our own, Caroline "CJ" Roy who plays for the Maret School in DC and also our Sage 16U team. CJ has been selected to receive the 2021 Gatorade District of Columbia Player of the Year award as a pitcher for the Maret varity softball team.

See Press Release below and also links from the Washington Post:

Press Release-MARET SCHOOL STUDENT-ATHLETE NAMED GATORADE DISTRICT OF COLUMBIA SOFTBALL PLAYER OF THE YEAR CHICAGO (June 18, 2021) — In its 36th year of honoring the nation’s best high school athletes, Gatorade today announced Caroline Roy of Maret School as its 2020-21 Gatorade District of Columbia Softball Player of the Year. Roy is the second Gatorade District of Columbia Softball Player of the Year to be chosen from Maret School. The award, which recognizes not only outstanding athletic excellence, but also high standards of academic achievement and exemplary character demonstrated on and off the field, distinguishes Roy as District of Columbia’s best high school softball player. Now a finalist for the prestigious Gatorade National Softball Player of the Year award to be announced in June, Roy joins an elite alumni association of state award-winners in 12 sports, including Cat Osterman (2000-01, Cy Spring High School, Texas), Kelsey Stewart (2009-10, Arkansas City High School, Kan.), Carley Hoover (2012-13, D.W. Daniel High School, S.C.), Jenna Lilley (2012-13, Hoover High School, Ohio), Morgan Zerkle (2012-13, Cabell Midland High School, W. Va.), and Rachel Garcia (2014-15, Highland High School, Calif.). The 5-foot-9 sophomore right-handed pitcher led the Frogs to a 9-4 record and the D.C. State Athletic Association championship this past season. Roy compiled a 9-1 record with a 2.59 earned run average in the circle, striking out 103 batters in 52.2 innings pitched. At the plate, she posted a .496 batting average with five home runs and 21 runs batted in and smacked a game-winning grand slam in the DCSAA championship game to give Maret a dramatic, come-frombehind, 7-6 win. A member of her school’s Black Lives Matter social justice initiative, Roy has volunteered locally on behalf of her church. “Caroline Roy is an incredibly talented, dual-threat softball player,” said Maret School head coach Madi Maldonado. “Offensively, she is a strong hitter with a mature mental approach at the plate. She is determined to get on base and cause chaos on the basepaths. As a pitcher, she strives to keep batters off balance by mixing speeds. Caroline Roy gives everything she has during the game and refuses to quit.” Roy has maintained a 3.70 GPA in the classroom. She will begin her junior year of high school this fall. The Gatorade Player of the Year program annually recognizes one winner in the District of Columbia and each of the 50 states that sanction high school football, girls volleyball, boys and girls cross country, boys and girls basketball, boys and girls soccer, baseball, softball, and boys and girls track & field, and awards one National Player of the Year in each sport. The selection process is administered by the Gatorade Player of the Year Selection Committee, which works with top sport-specific experts and a media advisory board of accomplished, veteran prep sports journalists to determine the state winners in each sport. Roy joins recent Gatorade District of Columbia Softball Players of the Year JoJo Scurry (2019-20, Wilson High School), Jamie Wang (2018-19, National Cathedral School), Logan Robinson (2017-18, National Cathedral School), and Sydney Love-Baker (2016-17, Georgetown Visitation Preparatory School), among the state’s list of former award winners. Through Gatorade’s cause marketing platform “Play it Forward,” Roy has the opportunity to award a $1,000 grant to a local or national youth sports organization of their choosing. Roy is also eligible to submit a 30-second video explaining why the organization they chose is deserving of one of twelve $10,000 spotlight grants, which will be announced throughout the year. To date, Gatorade Player of the Year winners’ grants have totaled more than $2.7 million across 1,117 organizations. Since the program’s inception in 1985, Gatorade Player of the Year award recipients have won hundreds of professional and college championships, and many have also turned into pillars in their communities, becoming coaches, business owners and educators. To learn more about the Gatorade Player of the Year program, check out past winners or to nominate student-athletes, visit playeroftheyear.gatorade.com, on Facebook at facebook.com/GatoradePOY or follow us on Twitter at twitter.com/Gatorade. ###