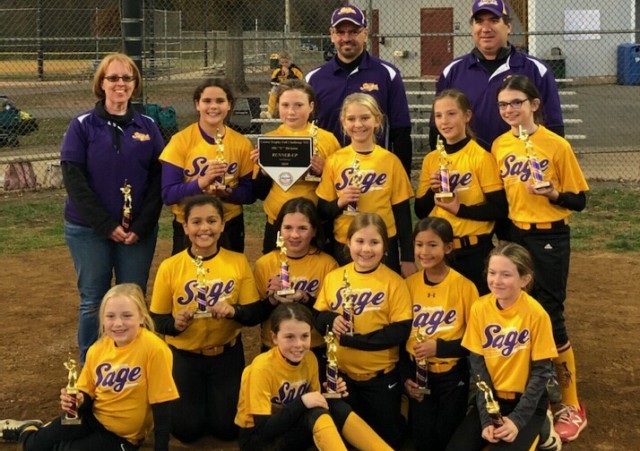 The Sage 10U team ended its Fall season with a strong showing at the USSSA Crown Trophy Fall Challenge NIT, finishing as the runner-up after a tightly contested championship game. The Sage stormed through bracket play on Sunday morning, winning 10-2 in the first round and then beating the No. 1 seed Ashburn Comets 5-3 in the semifinal. After taking two early leads of 2-0 and 4-3 in the championship game, and then fighting back to tie it 7-7 late in the game, the Sage fell just short to the ShenVal Swarm, 9-7. With a field that included Northern Virginia's top C-level teams, the Sage girls were sharp in all aspects of the game and demonstrated their solid improvement over the course of the season, with every member of the team making significant contributions. Our pitchers gave up just 5 hits and allowed just 5 runs in the first two rounds, and they struck out 20 batters on the day. Our defense was stingy, logging several 0-run innings, cutting runs down at the plate on outfield relays and executing a perfect run-down play. It also was the team's best overall offensive showing of the season: Sage batters had 23 hits, scored 22 runs and hit two multi-RBI home runs on Sunday. Most importantly, the Sage girls played their hearts out, had a blast and displayed the team's signature sportsmanship.